This article gives an overview of the LOTUS batch computing cluster which is part of JASMIN. It covers:

LOTUS is not, in itself, a High-Performance Computing (HPC) facility, but provides the batch and parallel processing component of the JASMIN data-intensive scientific analysis environment. LOTUS is a cluster of physical machines, running the SLURM workload manager , enabling efficient scheduling of larger data analysis tasks across nodes in the cluster as a single unit -see Figure 1. Each node in the cluster is connected by 10Gbit/s Ethernet to JASMIN's high-performance 40Gbit/s core network. Although not its primary function, LOTUS also facilitates MPI-based parallel processing.

JASMIN provides both interactive and batch computing environments,   that scientists often need to develop and test workflows interactively before running those workflows efficiently at scale. Nodes within LOTUS run the same stack of software and can access the same high-performance storage as the JASMIN Scientific Analysis servers, ensuring a consistent working environment for all phases of users' workflows. 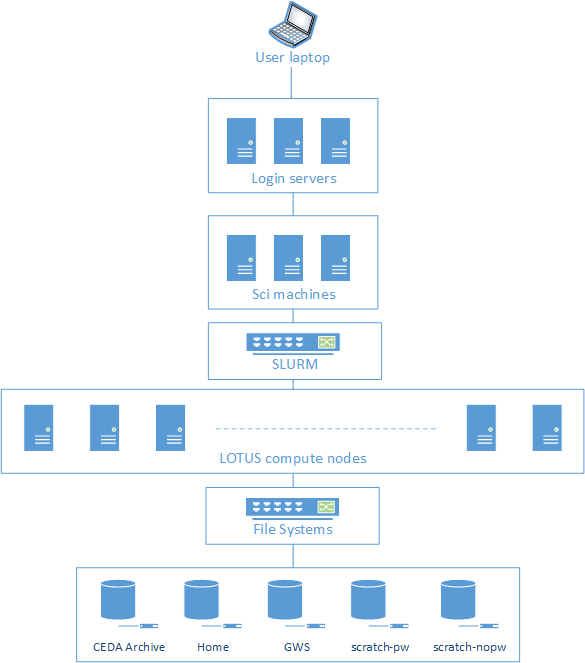 When to use LOTUS

LOTUS is ideally suited to workflows which need to process or compare entire datasets, stored either in Group Workspaces or in the CEDA archives. The latter are directly accessible read-only so can be processed in-place without the need to copy files. Intermediate working files (within batch jobs) should be stored temporarily in  /work/scratch-pw*  and /work/scratch-nopw volumes which are shared across the cluster, while persistent outputs can be written efficiently to Group Workspaces and shared with collaborators for the duration of a project.

See  Access to Storage for details about which file systems are appropriate to use and how to access them.

LOTUS currently has around 13000 cores, but is heavily used and implements a fair-share scheduling system between users. It is not intended as a substitute for dedicated HPC facilities, rather as a complementary environment in which model outputs can be analyzed and compared with observational data. Users with large-scale compute-heavy requirements (in particular those requiring large-scale parallel processing) should look to access other parts of the national HPC infrastructure such as  ARCHER or MONSooN.

In order to maintain a safe and reliable working environment for all within LOTUS and more widely within JASMIN, users are expected to follow the best practice outlined in this documentation.

LOTUS is accessible via the batch scheduler system SLURM that is running across all JASMIN scientific analysis servers and the LOTUS head node:

From the above servers, it is possible to submit, monitor, and control batch jobs using the SLURM commands.

Please note that if you have only recently requested access to JASMIN login services and had this approved, there can sometimes be a delay (typically up to a day, but in rare cases can be longer) before the necessary configuration is created for you on LOTUS. You will not be able to submit jobs to LOTUS queues until this has been completed. Typically you would see an error message such as this, in this case after an unsuccessful attempt to submit to the short-serial queue:

If this occurs, please try again in 24 hours before contacting the JASMIN help desk.