The JASMIN Notebook Service provides access to Jupyter Notebooks in the web browser.

What is a Jupyter Notebook?

A Jupyter Notebook is an interactive document containing live code and visualisations that can be viewed and modified in a web browser. These documents can be shared, often using GitHub, and many projects distribute example code as Jupyter notebooks. Users interact with their notebooks using the open-source Jupyter Notebook server application.

Jupyter has support for many languages including Python, R, Scala and Julia, which are implemented by plugins known as "kernels". The JASMIN Notebook Service currently provides one kernel - Python 3.8 with the latest Jaspy software environment installed. This environment is active by default, so there is no need for the module commands described in the linked article. You can also install and use your own Python environments as explained below.

Whilst it has been possible to use Jupyter Notebooks on JASMIN before now, doing so has never been officially supported. The JASMIN Notebook Service uses JupyterHub to manage multiple Jupyter Notebook servers. After authenticating with a JASMIN account (with the correct access), a user gets access to their own notebook server. The notebook server runs as the authenticated user, and the user can access their home directory, Group Workspaces and CEDA Archive data as they would from a scientific analysis server.

In order to access the JASMIN Notebook service, first, follow the steps in Getting started with JASMIN to get a JASMIN account and the jasmin-login service.

Important: From 16/6/2021, access to the JASMIN Jupyter Notebook service is controlled simply by having a valid jasmin-login 2-step verification is still required as shown below, but it is no longer necessary to apply for and be granted the additional jupyter-notebooks role, which is now deprecated.)

To use the JASMIN Notebook Service, navigate to https://notebooks.jasmin.ac.uk. This will redirect you to the JASMIN Accounts Portal, where you should sign in with your JASMIN Account. If you have previously accessed the notebook service from the computer you are using, this may happen automatically.

The first time you access the JASMIN Notebook Service from a new computer or browser, you will be asked to verify your email address after signing in. To do this, make sure the "Email" method is selected and click "Send me a code":

This will result in an email being sent to your registered email address containing a six-digit verification code. Enter this code and press "Verify code". Each code lasts between 15 and 30 minutes.

Upon successfully signing in and verifying your email if required, you will be redirected back to the JASMIN Notebook Service. The service will then create a notebook server for you to use, and you will see a loading page:

After a few seconds, or in some rare cases a minute or two, you will be taken to the JupyterLab interface: 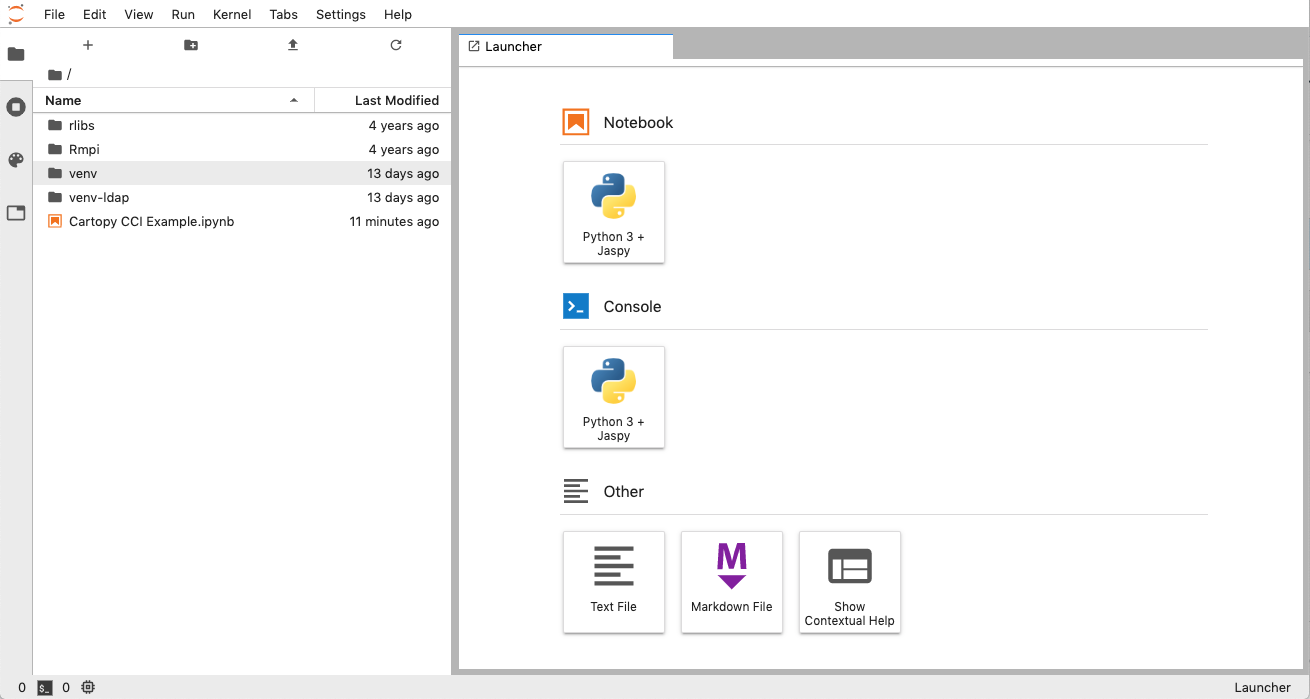 The folder shown in the left-hand panel will be your home directory on JASMIN, exactly as if you had logged in to a scientific analysis server. Any changes made in JupyterLab will be immediately reflected on the scientific analysis servers and LOTUS, and vice-versa. You can then launch, edit and run Python notebooks using the JupyterLab interface. Notebooks can access files from the CEDA Archive, and also have read-only access to group workspaces. For example, this notebook reads a file belonging to the CCI project from the CEDA Archive and plots the data on a map: 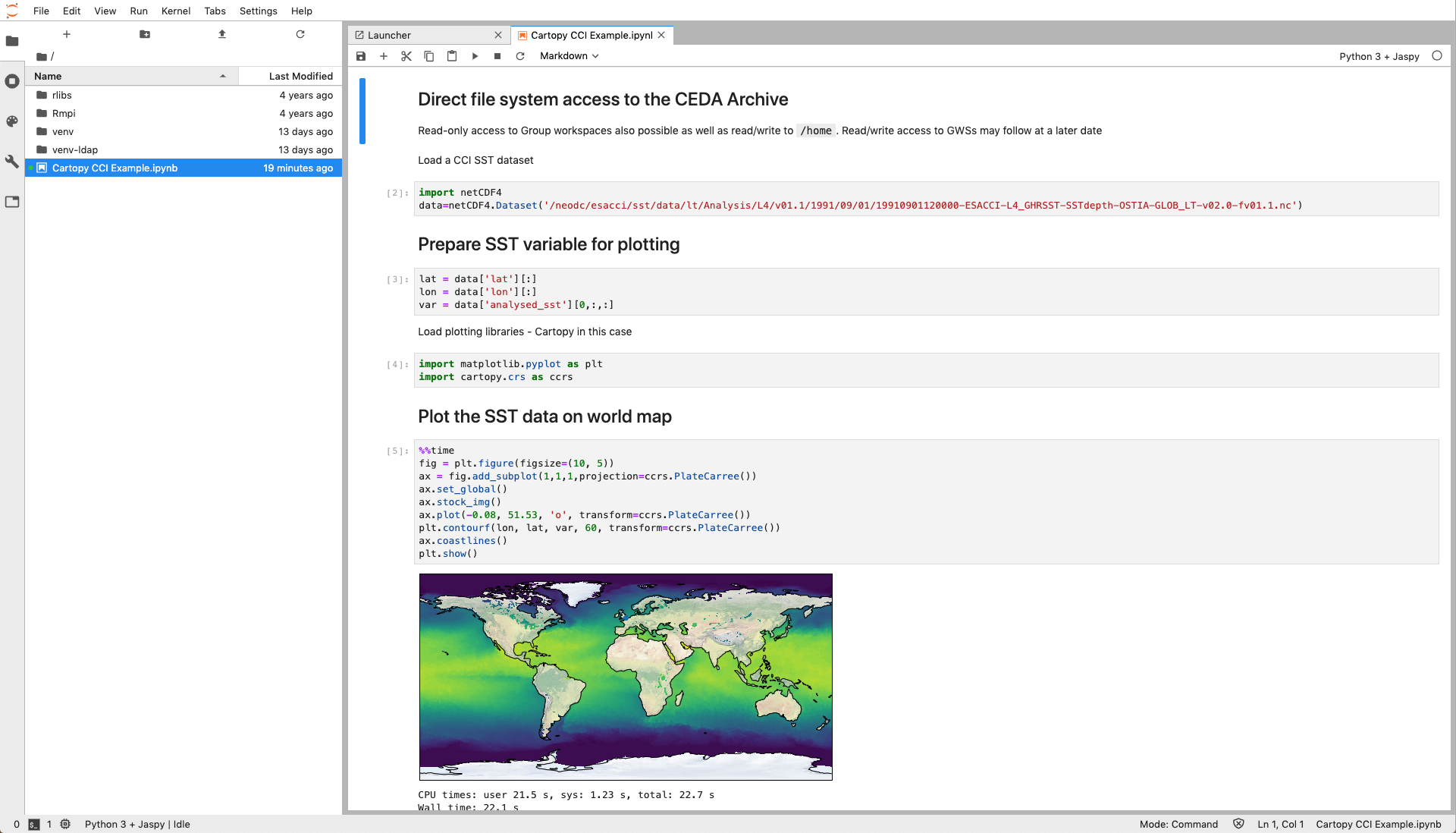 The JupyterLab environment provided by the JASMIN Notebook Service is powerful, but it has some limitations that reflect the type of usage that we want to encourage.

The service is primarily intended for interactively producing visualisations of existing data, not for processing vast amounts of data. As such, the resources made available to each notebook server are limited, and Group Workspaces are only mounted in read-only mode. For heavy processing, users should still use the LOTUS batch processing system before using the notebook service to visualise the data.

This error occurs when you do not have the correct permissions to access the JASMIN Notebook service. Please ensure you have been granted the jasmin-login and allow some time for the changes to propagate through the system.

Which software environment is used by the Notebook Service?

Can I use a different software environment?

You can install your own Python (conda) environment instead of using the Jaspy environment. Instructions for doing this can be found here:

Can I install additional packages?

You cannot install additional packages directly into the notebook environment. However, it is possible to create a Python virtual environment for use within your notebooks by following the instructions in this notebook:

If you believe that the package is more widely applicable, you can request an update to Jaspy.

This error occurs when your notebook server is unable to start. By far the most common cause of this error is when you are over your quota in your home directory. As part of starting up, Jupyter needs to create some small files in your home directory in order to track state. When it is unable to do this because you are over your quota, you will see the "503 service unavailable" error.

The message above indicates that the Notebook service is oversubscribed -busy- and there are no resources available to start your Notebook server. Please try again later!

Please use the scientific analysis server and LOTUS for processing and jupyter Notebook for lighter visualisation.

In support of the JASMIN Notebook Service, we have developed a GitHub repository with a collection of Notebooks that demonstrate some of the important features of the service. The following provides a general introduction:

Other Notebooks can be found within the repository, under:

A video tutorial explaining how to use the service was provided via a webinar on 16th June 2020. A YouTube video of the event is available:

Here are a set of links to learn more about Jupyter Notebooks and the JASMIN Notebook Service: