This article describes how to use the JASMIN high-performance object storage.

What is object storage?

An object store is a data storage system that manages data as objects referenced by a globally unique identifier, with attached metadata. This is a fundamental change from traditional file systems that you may be used to, as there is no directory hierarchy - the objects exist in a single flat domain. These semantics allow the object store to scale out much more easily than a traditional shared file system.

The other fundamental change is that the data is no longer accessed by mounting a file system onto a host and referencing a file path (where authentication is "can I log in to the host"). Instead, the data is accessed over HTTP, with authentication using HTTP headers. This has many benefits, the biggest of which is that we can make the object store available outside of the JASMIN firewall, for example to the JASMIN External Cloud. Data can be read and written in the same way, using the same tools, from inside and outside JASMIN. Contrast this with Group Workspaces, where you must be logged in to a JASMIN host in order to write data using the file system, and data is only accessible externally in a readonly way using HTTP or OPeNDAP.

The JASMIN object store is organised into  tenancies.  These are shared areas of the object store, similar in concept to Group Workspaces, and are requested by users, usually Group Workspace Managers.  Several users can have access to a tenancy, and so they can be used collaboratively.

To join an existing object store tenancy, navigate to the "Services" section in the JASMIN Accounts Portal and select the "Object store" category. Select a tenancy and submit a request to join. This request will then be considered by the manager of the tenancy and either accepted or rejected. 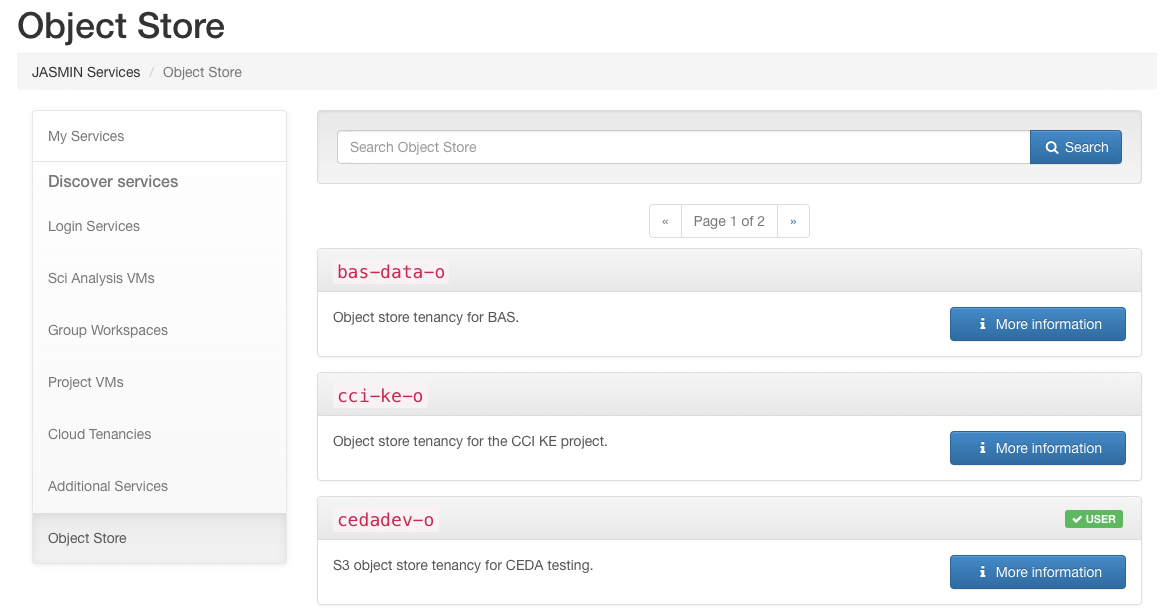 For details on how to request and manage an object store tenancy, please see the help article "JASMIN Object Store for Managers" (forthcoming).

Authentication with the object store uses an access key and secret that are separate to your JASMIN username and password. You can generate an access key and secret using the Caringo portal. This portal is not currently available outside of JASMIN - you will need to use a graphical session on JASMIN to access a Firefox browser running on a JASMIN system.

The recommended way to do this is using the NX Graphical Desktop service. You can start Firefox from the "Activities" menu once you have logged in to your graphical desktop on one of the nx-login* servers (so no need to make an onward connection to a sci server).

An alternative option is to using X11 Forwarding on your SSH connection:

Once you have Firefox open, navigate to http://my-os-tenancy-o.s3.jc.rl.ac.uk:81/_admin/portal (where "my-os-tenancy-o" needs to be replaced with your tenancy name). You will see a login screen where you should enter your JASMIN username and password:

Upon successfully entering the username and password of a user who belongs to the tenancy, you will see a dashboard. To create an access key and secret, click on the cog icon and select "Tokens":

In the dialogue that pops up, enter a description for the token and set an expiration date. Make sure to click "S3 Secret Key" - this will expose an additional field containing the secret key. Make sure you copy this and store it somewhere safe - you will not be able to see it again! This value will be used whenever the "S3 secret key" is required.

Once the token is created, it will appear in the list. The "Token" should be used whenever the "S3 access key" is required:

Accessing data in the object store

Although the data is exactly the same in both cases, a slightly different URL must be used depending on whether you are accessing the object store from the JASMIN managed cloud servers or from the JASMIN External Cloud.

From inside JASMIN, including LOTUS and the Scientific Analysis servers,  my-os-tenancy-o.s3.jc.rl.ac.uk should be used.

From the JASMIN External Cloud,  my-os-tenancy-o.s3-ext.jc.rl.ac.uk should be used - note the additional -ext.

Currently, the Object Store cannot be accessed from outside of JASMIN itself.

s3cmd is a command line tool provided by Amazon to work with S3 compatible Object Storage.  It is installed on JASMIN, both on the sci-machines and on LOTUS.  It is a little more complicated to use than the MinIO client, but is more powerful and flexible.  For full details on s3cmd, see the s3tools.org website.

To configure s3cmd to use the JASMIN object store, you need to create and edit a ~/.s3cfg file.  To access the my-os-tenancy-o tenancy (where "my-os-tenancy-o" needs to be replaced with your tenancy name), the following should be in the ~/.s3cfg file:

To see which commands can be used with s3cmd, type:

To copy a file from a bucket in the object store to the file system:

For more commands and ways of using s3cmd, see the s3tools website.

The MinIO Client is a command line tool to connect to object stores (among other types of file storage) and interface with it as you would with a UNIX filesystem. As such, many of the UNIX file management commands found in standard installations of the OS are found within this client ( ls, cat, cp, rm for example).

There are a number of ways to install this client as shown in the quickstart guide. Methods include: docker, Homebrew for macOS, wget for Linux and instructions for Windows. Follow these steps to get the client installed on the relevant system.

MinIO Client is not installed on JASMIN, but users can download and install it to their own user space, following the instructions for "64-bit Intel" (linux-amd64) in the MinIO quickstart guide.  Below is an example to install it into the bin directory in your user space

You can then add the  ~/bin directory to the PATH environment variable in your ~/.bashrc file to allow mc to be accessed from anywhere on JASMIN.

To configure the client with the JASMIN object store, create an access key and secret as documented above and insert them into the command:

The ALIAS is the name you'll reference the object store when using the client. To demonstrate, if the alias was set to "jasmin-store", displaying a specific bucket in the object store would be done in the following way:

The commands available in the client are documented in the quickstart guide (linked above). Copying an object from one place to another is very similar to a UNIX filesystem:

One method of accessing the object store from Python is using s3fs. This library builds on botocore but abstracts a lot of the complexities away. There are three main types of object in this library: S3FileSystem, S3File and S3Map. The filesystem object is used to configure a connection to the object store. Note: it's strongly recommended to store the endpoint, token and secret outside of the Python file, either using environment variables or an external file. This object can be used for lots of the operations which can be done MinIO:

Please note in the example above, the jasmin_object_store_credentials.json file would look along the lines of:


S3File is used for dealing with individual files on the object store within Python. These objects can read and written to and from the store:

S3Map is very useful when using xarray to open a number of data files (netCDF4 for example), and turn them into the zarr format ready to be stored as objects on the store. The function for this can store a .zarr file in a POSIX filesystem, or can be streamed directly to an object store. These datasets can then be opened back into Python: