This software is now deprecated within JASMIN and an alternative solution is soon to be available (May 2020): please look out for announcements.

This article explains how to use x2go to access a graphical Linux desktop environment within JASMIN. It explains:

Currently there are instances of x2go server available on jasmin-sci[12].ceda.ac.uk and cems-sci1.cems.rl.ac.uk and on the bastion machine jasmin-login3.ceda.ac.uk.

At present this service should be considered “pre-production” as some aspects are still under evaluation and may be subject to change.

Which server to connect to?

Please be aware that using graphical applications to navigate files and folders in Group Workspaces or other large JASMIN file systems may cause very heavy load due to the “read ahead” required to support graphical navigation and may cause slow performance for you and other users.

Setting up your connection

1) From Inside the RAL network (e.g. STFC staff)

Set set up the options as shown below, specifying the host to connect to, and "Try auto login (via SSH Agent or default SSH key)" 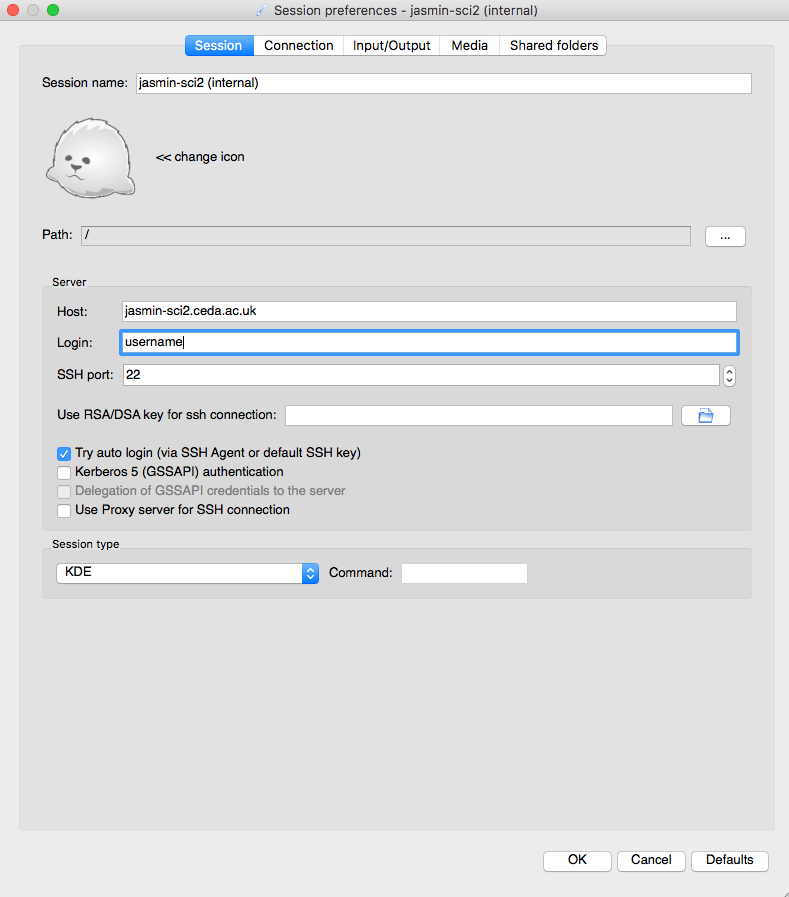 2) From outside the RAL network (all other users)

b) set up manual SSH tunnel

This example sets up an SSH tunnel to connect to jasmin-sci2.ceda.ac.uk

[In a terminal window on your local machine]

(NB if you are setting up several of these for different sci machines, be sure to use a different port number for each sci machine (e.g. 6661 for sci1, 6662 for sci2).

The terminal will make a connection to the remote machine but will not display a login prompt.

[In a second terminal window]

Are you sure you want to continue connecting (yes/no)? yes

Then logout: now that you’ve done this once, an entry for localhost:6662 will exist in ~/.ssh/known_hosts and x2go can make use of this as a proxy for jasmin-sci2.

Set up the connection page of your session preferences as follows, being sure to use the same port number on localhost as you used to set up the tunnel: 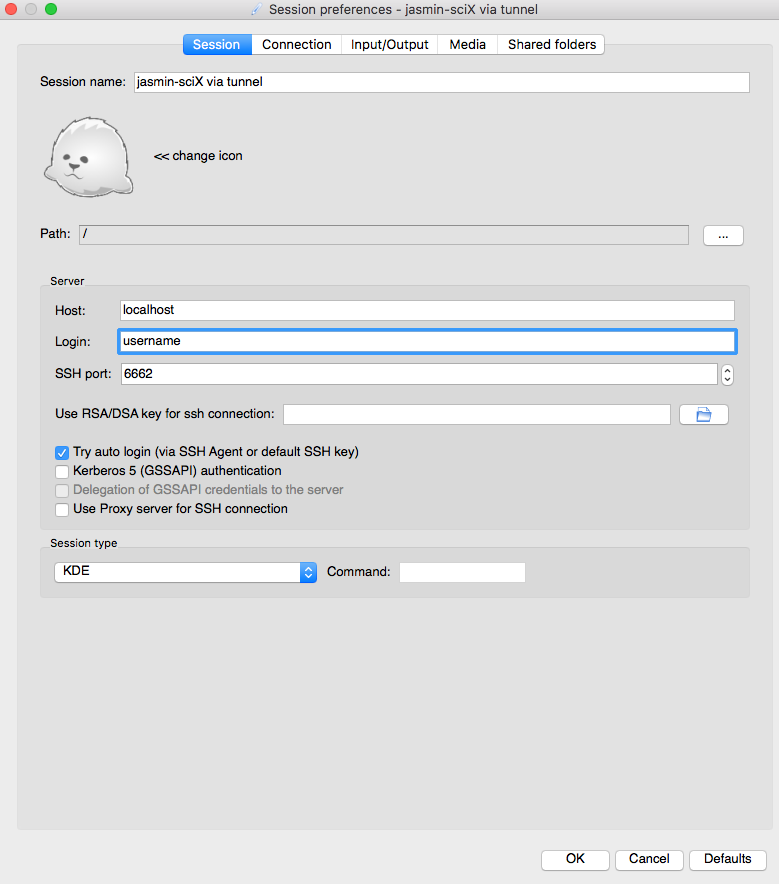 The desktop session should now start.

To locate the “Terminal” application within the KDE desktop on the server, click the Redhat Logo (bottom left), search for “terminal” and choose one of the 2 suggestions. Once set up, you should review the Connection and Input/Output preferences for your session (e.g. compression, DPI) to optimise the display quality for the performance of your connection. 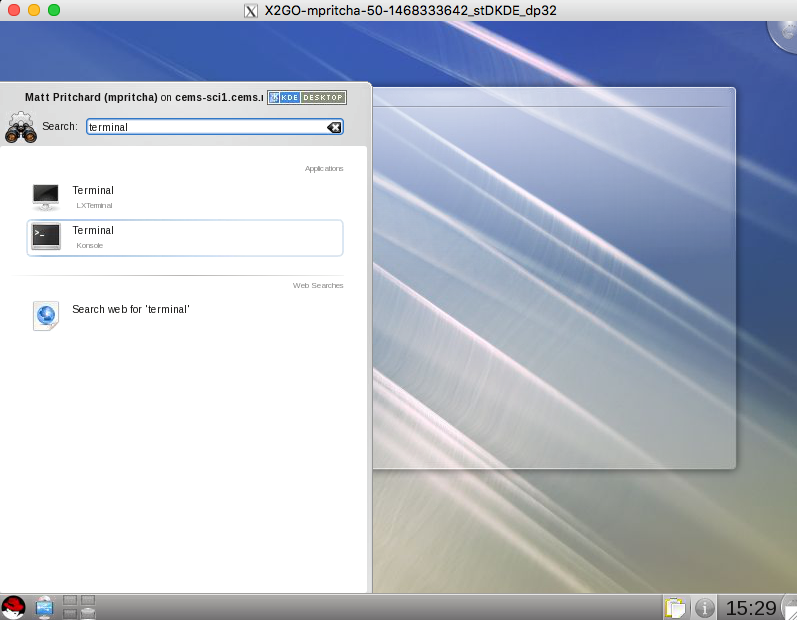 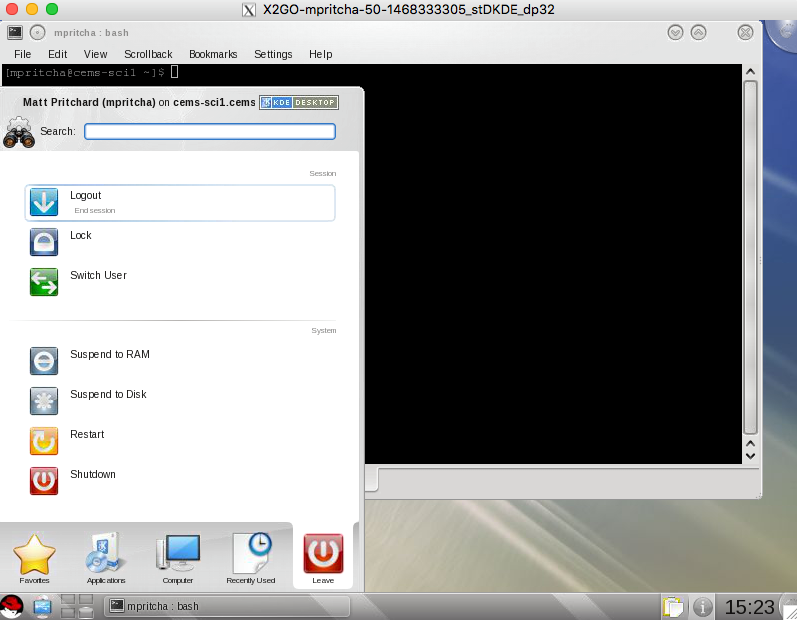 One limitation of the current version of x2go is that SSH agent forwarding does not work. The instructions below work around this to enable you to initiate a session on the x2go server, then make a subsequent connection to another JASMIN machine.

1) In a terminal window on your local machine:

(or Putty with Agent Forwarding enabled)

Create X2go KDE session on jasmin-login3 in the usual way. This gives us our working X Server .

But when you “ls" to test existence of this file, it will NOT exist (i.e. agent forwarding does not yet work properly)

So we generate a symbolic link to the working socket, in place of the missing file.

Replace the actual file names and paths with the ones from item 1 and item 2 in the previous steps, all on one line:

Now we can test it:

(In a terminal window in the Linux desktop presented by x2go):

Since the link we created is a link outside the shell environment, it should persist for any ssh [ -A ] remote session from this active Linux desktop session.