Introduction to the JASMIN Cloud

Many users will already be familiar with cloud services through the use of one of the large public providers (e.g. Amazon AWS or Microsoft Azure). The JASMIN Cloud is similar in that it allows an institution or project to consume compute resources as a utility, with no need to provision and maintain the associated physical infrastructure. Users can provision their own virtual machines (VMs) within the JASMIN infrastructure, allowing for greater flexibility.

The thing that makes the JASMIN Cloud unique is it's colocation with the CEDA Archive and Group Workspaces. The JASMIN Cloud is ideally suited to projects that work with such data, and can enable novel solutions for the manipulation and presentation of data to end-users.

Different cloud providers have different terms for the users within their cloud and the chunks of resource they have been allocated. In the JASMIN Cloud documentation, we will use the following terminology:

In order to provide as much flexibility as possible for tenants while preserving the security of the system, the JASMIN Cloud is split into two parts (see the schematic below). Both parts of the JASMIN Cloud are administered through the same self-service portal, allowing tenancy admins to provision VMs as required, within the quota of their tenancy. 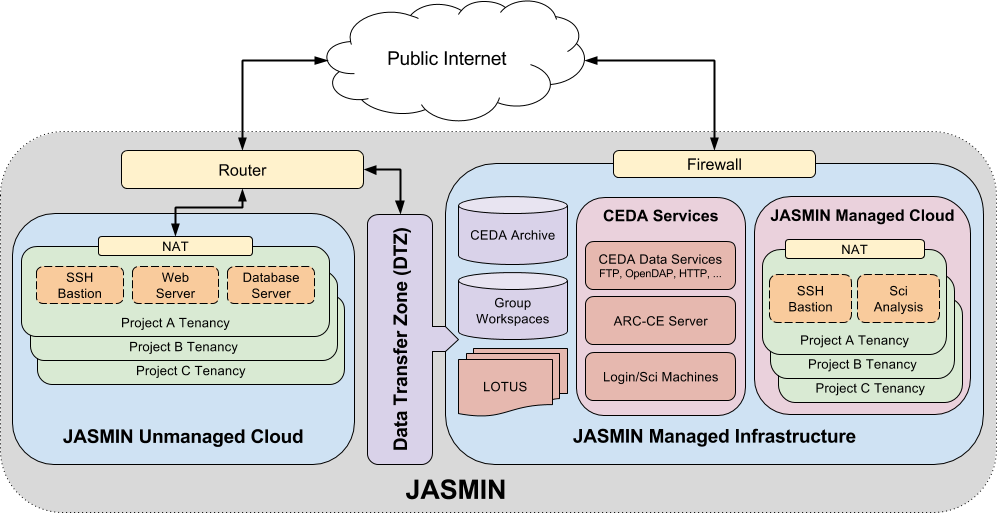 The JASMIN Unmanaged Cloud is an Infrastructure-as-a-Service (IaaS) offering, and sits outside of the main JASMIN firewall. Tenants are allowed root access and have complete responsibility for all system administration tasks. This means that tenants are able to provision their own infrastructure (e.g. web portals, remote desktop services), but it also means that tenants are responsible for the security of their machines (e.g. patching, firewall configuration) and for managing their own users. Because it is outside of the JASMIN firewall, tenancies in the Unmanaged Cloud cannot directly access the Panasas fast disk, and so there is no filesystem level access to the CEDA Archive or Group Workspaces - all access to these data is via the usual external interfaces (i.e. FTP, OpenDAP, HTTP). However, they do benefit from a direct connection to the Data Transfer Zone (DTZ), and being close (in network terms) to the CEDA Data Services.

By contrast, the  JASMIN Managed Cloud is a Platform-as-a-Service (PaaS) offering, sitting inside the main JASMIN firewall, meaning it can reach the Panasas fast disk. In order to preserve security, this means that tenants are not allowed root access, and can only deploy VMs from a limited set of pre-approved templates. However, tenants are not responsible for the security of these machines, and users on VMs within the tenancy are JASMIN users. Currently, only two templates are available - an SSH bastion, or login machine, and a Scientific Analysis server with a similar configuration to the shared JASMIN Scientific Analysis servers. The Scientific Analysis servers have the CEDA Archive and Group Workspaces mounted.

Unmanaged vs. Managed - pros and cons

Getting a JASMIN Cloud Tenancy

To start a conversation with us about getting a JASMIN Cloud Tenancy for your project, please contact JASMIN Support.