NOTE [January 2021] This article is now out of date. Some terminology, names and components are no longer current. A newer version will be posted here in due course.

This article describes the external connections used to enable movement of data in to and out of JASMIN. It covers:

JASMIN resides within the STFC Rutherford Appleton Laboratory (RAL) site network, which is currently connected at 4 x 10Gbit/s to the JANET backbone, as shown in Figure 1, below. An internal ECMP non-blocking 40Gbit/s network provides multi-Terabit/s performance within the JASMIN core, but is described more fully elsewhere, e.g. this  presentation. 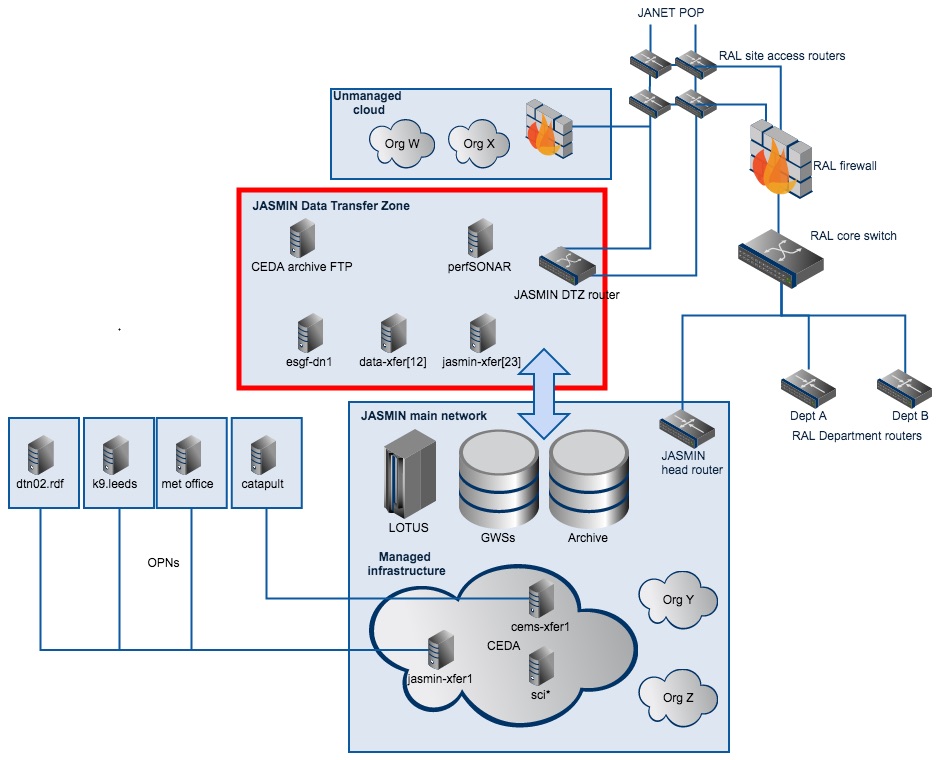 The RAL site access routers form the JANET Point of Presence (POP) on the RAL site and connect the RAL site network to the JANET backbone: the high-throughput core of the UK's academic and research network.

Most of the main JASMIN compute and storage is housed within the Managed Infrastructure, including the scientific analysis servers (sci*), along with transfer servers jasmin-xfer1.ceda.ac.uk and cems-xfer1.ceda.ac.uk. The LOTUS processing cluster, and fast storage used for Group Workspaces and the CEDA archive are also in this zone.

Dedicated Optical Private Network (OPN) connections exist, connecting local JASMIN/CEMS components with specific resources at remote sites. OPN connections ensure a low latency (round-trip time) and dedicated bandwidth for users of the link, as opposed to using the shared or public JANET connection. These links are terminated on specific virtual hosts within the JASMIN managed infrastructure, so it is only traffic between the specific resources listed which uses the OPN route: traffic between other hosts at either the local or remote ends will use the standard JANET backbone connection.

The following OPN links are provided:

A special zone within the JASMIN network has been set up to enable high-throughput science data transfers as efficiently as possible. The JASMIN Data Transfer Zone has been adapted from the  ESnet "Science DMZ" concept.

A small number of specific services requiring high performance data transfer capability are located in a zone which has a separate security policy to the rest of the JASMIN network. This enables regular user traffic flows to be handled by the RAL site firewall, while large-scale science data flows can proceed as efficiently as possible.

Services within the JASMIN DTZ are hosted on high-performance physical servers, each connected at 10Gbit/s* and with a separate internal link to the fast storage to ensure efficient data flow. The security policy for this zone usually requires that IP address of the remote host involved in the transfer is known in advance and added to an "allow list". It is for this reason that the additional "high performance data transfer service" access role is used to capture this information when requesting access to some of these services.

The following services are currently provided within the JASMIN Data Transfer Zone:

The external part of the JASMIN Community Cloud resides in a portion of the network belonging to NERC rather than STFC. This enables outward-facing services maintained by non-STFC individuals to be operated from within the unmanaged cloud.

It shares bandwidth to the outside world with the JASMIN Data Transfer Zone, but has its own firewall router which can be used by the JASMIN infrastructure management as an "emergency stop" if circumstances dictate.

Tenants within the unmanaged cloud manage their own UID/GID space and are not governed by the central LDAP used in the main JASMIN infrastructure. This is one reason why there is no direct connectivity from the unmanaged cloud to filesystem resources such as the CEDA archive or Group Workspaces, since these resources rely on LDAP to provide access control. However, as can be seen in the network diagram (Fig. 1) above, use of the services within the JASMIN DTZ gives access to data resources via the standard interfaces (e.g. FTP) which are very proximal in the network sense and should provide good performance.

Further work is currently underway to explore ways of enabling access to data resources from the unmanaged cloud via other methods.